The Bachelor of Global Engineering by CentraleSupélec and the Faculty of Engineering of McGill aims at bringing together the best that systems and institutions have the best to offer. Classes at both universities follow the same objectives of excellence and interdisciplinarity. CentraleSupélec can rely on the one hand on its experience and innovations in teaching engineering and, on the other hand, the Classes préparatoires rigour. McGill classes will all be already existing classes, and students will choose their classes within a given framework.

The classes at CentraleSupélec will match the Classes préparatoires rigour, but the spirit is entirely different. Students do not prepare for competitive examinations but follow classes to better choose their major for the last two years, giving them a broad scientific culture. The goal is to give them the best tools to succeed in any engineering field offered within the streams at McGill.

Every year will be unique, you won't have the time to be bored during this Bachelor! During the four years that the program lasts, outside of classes, students will have the opportunities to do an internship with a company and to deepen their knowledge of sustainable development and social challenges.

At CentraleSupélec, the academic year is divided into four sequences. Shorter periods mean fewer classes at the same time and the opportunity to focus better and go in-depth on those topics. Each sequence lasts for six weeks, and between them, there are one or two-week projects or intense courses.

Arrival on campus at the end of August, followed by two orientation weeks.

At McGill, the academic year is divided into two semesters. The calendar of the Bachelor is established on McGill’s and North American standards. During the summer, students are required to do an internship at a company.

Calendar example at for Year 3 (McGill)

The two first years at CentraleSupélec are divided in 8 sequences, where a class lasts for one sequence. The curriculum is very generalist in terms of topics: mathematics, physics, computer science, biology, chemistry, and social sciences. Below is the detail of the projects and topics for each sequence.

The format is a mix between Classes préparatoires and university: intellectual and work freedom, and a cohort and classes of small size. The teaching staff will be comprised of professors from Classes préparatoires, faculty members, researchers and PhDs from CentraleSupélec. In mathematics, the same professor will teach all the classes throughout the year, and it will be the same for physics classes. It allows a better follow-up and supervision of the students. At the end of each sequence of classes, there is a one or two-week project. 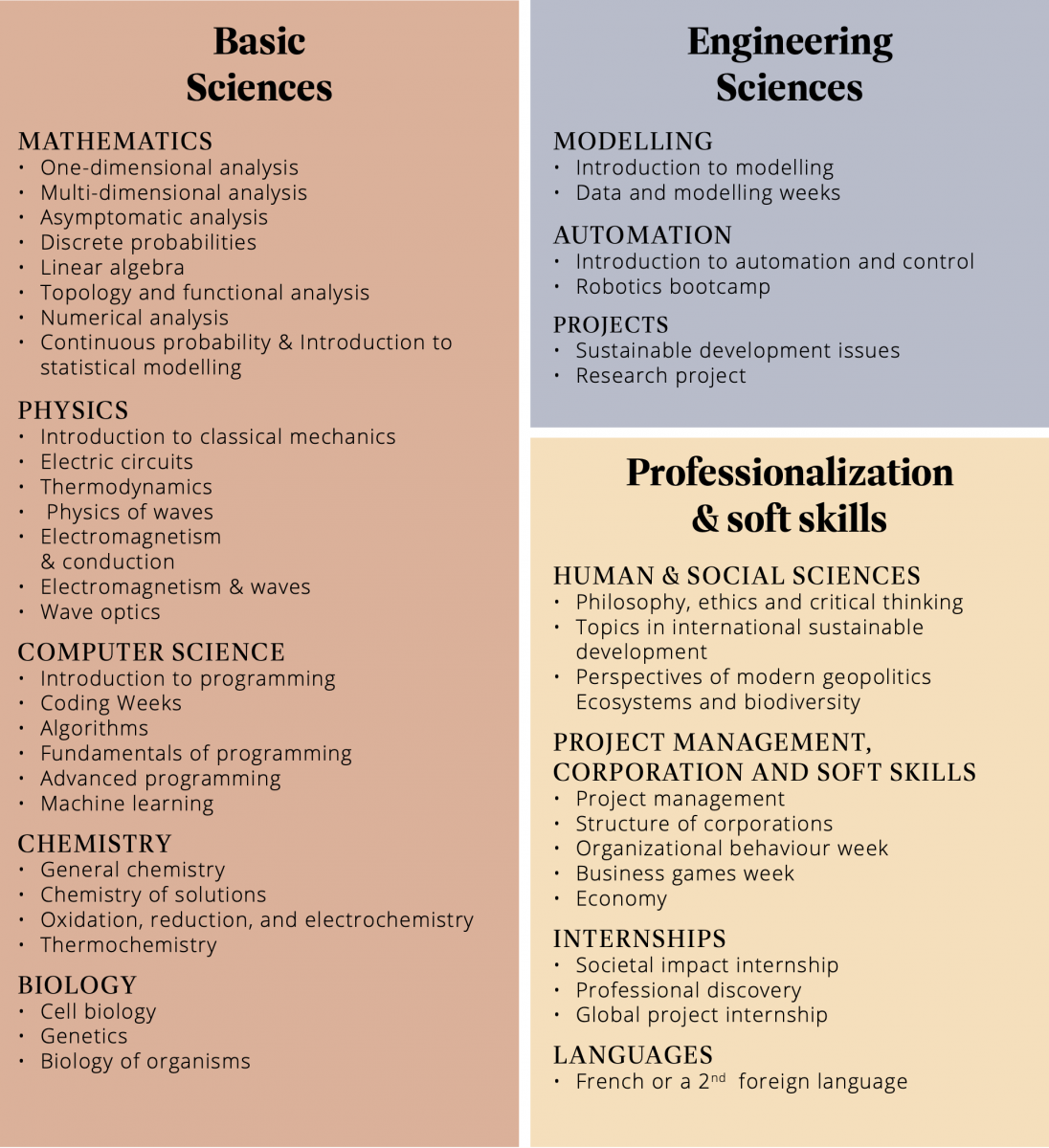 Students in the Breadth stream receive a diverse scientific education that covers a wide range of subjects and fields. This multidisciplinary program allows students to acquire fundamental knowledge in all engineering disciplines, complemented by elective courses on sustainable development, as well as additional courses in the humanities and social sciences. The training provided to students in the Breadth stream will prepare them for careers requiring the supervision and management of various technical teams, projects and organization, whether in industry, government, or non-governmental organizations.

Bioengineering takes advantage of the sophistication of living systems as both a source of inspiration as a tool for design and creation. It is a rapidly growing discipline that covers a wide range of topics such as materials science and tissue engineering, biomedical devices and instruments, molecular and cellular engineering, and environmental and environmental engineering. Bioengineering is unique in that it combines the fundamental principles of engineering with biology. Therefore, bioengineers must acquire a strong background in mathematics, physics and chemistry.

Bioengineers can work in many different fields, including pharmaceutical industry, medical devices, public health, bioenergy and agricultural biotechnology. As bioengineers acquire, through their studies, the complementary skills needed to be good project managers, they can also access to management and executive positions.

Chemical engineers design, operate, model, and optimize a variety of systems and processes. They produce new products and technologies to support population growth and meet the world's increasing demand for natural resources around the world. What a chemist can produce in a test tube, a chemical engineer chemical engineer can produce by the ton while ensuring that the process is as efficient as possible, as well as sustainable and environmentally friendly. To do so, efficient and efficient and effective systems are needed. Therefore, chemical engineers are involved in the entire life cycle of products, from raw material extraction to recycling and safe disposal, through processing and integration into commercial goods and equipment.

A chemical engineering education provides students with the skills and experience to design, optimize, and operate production and manufacturing systems as well as to manage production and manufacturing systems, but also to manage a team or a company in its human, financial and financial and economic dimensions. Chemical engineers therefore work in many fields, including pharmaceuticals, biotechnology and medical devices, pulp and paper, food and beverage processing, petrochemicals, energy, advanced materials, mining, environmental engineering and production and manufacturing. They are involved in creating efficient, safe and sustainable processes from an economic, societal and environmental perspective. This includes the development of cleaner, more energy-efficient fuels, as well as waste treatment and disposal methods.

The civil engineering program trains engineers with varied profiles who create the infrastructures of modern society, from roads to water management to the buildings in which we live in. Environmental engineers ensure the sustainable development of water, land and air resources while minimizing the impact on our environment, climate and our public health. Geotechnical engineers study the behavior of soils under the influence of load forces to stabilize foundations. Water resource engineers quantify and manage the components of the hydrological cycle such as precipitation, river flow precipitation, river flow and groundwater dynamics. Structural engineers

Civil engineering graduates use and develop modern technologies to meet the needs of our ever-changing society. Concerns about the quality of the environment, climate change, energy saving, infrastructure rehabilitation, waste reduction infrastructure rehabilitation, waste reduction and public safety are now shaping the role of civil of civil engineers. As a result, civil engineers work in a variety of fields, including construction, transportation, renewable energy, manufacturing and process manufacturing and process engineering, materials science, financial services, and public works. Their problem-solving and communication skills make them excellent consultants, contractors, managers and executives.

The training provided to students in the Data science stream will prepare them to for jobs in a variety of industries, including artificial intelligence, information technology, management consulting, or any of the many sectors in which large data sets are in which large sets of collected data must be explored and studied.

The Electrical engineering stream provides a broad range of experience in a wide variety of topics, including electrical and electronic systems, as well as software and hardware design. Electrical engineers design and develop the electronic systems that underlie technologies such as autonomous vehicles, robotics, telephony, video games, telephony, video games, automation and home power.

Students in the Entrepreneurship stream receive a broad technical education complemented by business and management training, all with a focus on entrepreneurship. In addition to a solid foundation in the engineering sciences, students take courses in entrepreneurship, business plan design, etc. The complete training provided to the students is designed to train engineers with the ambition to pursue a career as an entrepreneur, or capable of innovating within companies.

Materials engineers transform matter, producing and evaluating its properties (mechanical, electrical, optical, thermal, chemical, biocompatible, surface) using numerical models. They are trained to understand the relationship between structure and function of materials such as metals and alloys, ceramics, industrial minerals industrial minerals, polymers, and composite nanomaterials. Materials engineering students engineering students learn how steel and other materials are made, and their structure and properties can be adjusted. They may take advanced courses in topics such as aerospace materials, metallurgy and nano-fabrication.

Materials engineering education provides skills for a wide range of employment opportunities. Depending on their interests, graduates may work in mineral processing or metal production companies, be hired by engineering or management consulting firms to work on local and global projects, test and design materials for the aerospace, battery, or automotive industries. Their training also allows them to acquire cross-disciplinary skills such as problem solving, time management and teamwork.

Mechanical engineers are curious about how things work and how to improve them. This includes devices - from airplanes to artificial hearts - but also processes such as energy conversion or production systems. They generally enjoy design, work in teams, and use math and physics to find creative new solutions to the problems around them. Mechanical engineers work in the design, manufacturing and operations units in countless industries, including aerospace, automotive, biomechanical, energy. Mechanical engineers often become excellent project managers or corporate executives.

Every stream count three humanities classes. The first one must be chosen among a given list of courses focused on the impact of technologies on society. The two other classes are to be chosen in a broader scope and can be related to social sciences, management, law, or humanities.